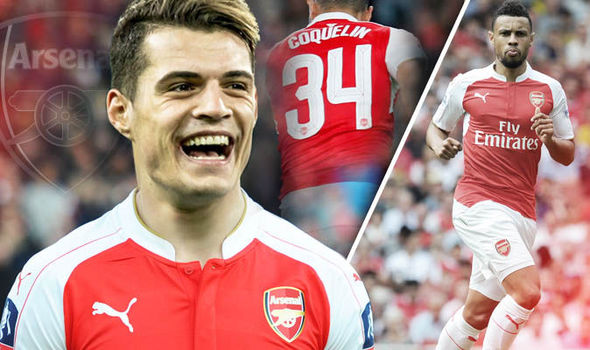 Borussia Monchengladbach defensive midfielder Granit Xhaka looks set to disappoint both Liverpool and Chelsea by joking about what number jersey he would like to wear at Arsenal.

Xhaka currently wears the number 34 jersey with the Bundesliga club, the very same number that is worn by his opposite at Arsenal, Francis Coquelin.

“That was my first professional number at Basel,” Xhaka said. “It’s even tattooed on my back. I would also like to wear it in the future.

“It was also here in Gladbach, with Amin Younes. And at Arsenal Coquelin has it. I’ve spoken with him, he would like to take another number!”

Meanwhile Monchengladbach are playing down any talk of a possible move for the Swiss international concentrating on trying to finish the season in a Champions League berth.

“I have a childhood dream, that is the Premier League,” Xhaka said.

“Whether I play two or a hundred games in England, I would like to eventually make this childhood dream come true.”

Despite having already signed a defensive midfielder in the form of Basel’s Mohamed Elneny the future of Mikel Arteta, Mathieu Flamini and Tomas Rosicky is in doubt beyond the end of the season, which opens the door for Arsenal to pay the German clubs £37 million asking price.