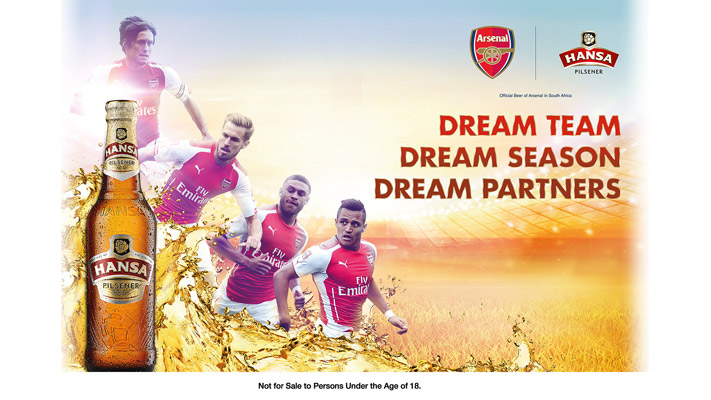 Arsenal have cranked up it commercial activities once more by signing another commercial partner, this time it is one of the brand beer of South African Breweries.

This is another feather to the club’s cap as it has gradually shifted away from the shackles of the financial austerity of the past by building on it commercial activities in other to rake in more revenue.

The club essentially garners its main income from television deals, match day revenue. But, there have been renewed drive from the commercial team to diversify it revenue base by increasing it partnership with several global players in the financial world.

The new Puma deal and the renewed partnership with the Emirates are testament to this fact.

This can only be a good thing for Arsenal in the long run, as the spill over of this is that there would be more money to spend in the transfer market.

And going by what has transpired in this summer’s transfer window, there can more ahead in the coming years.

The new found financial power can only be sustained by launching into new markets, and extending the outreach to it fan base in other parts of the World.

And going by the partnership with the South African Breweries, it means the large follower ship in Southern Africa can have a taste of Arsenal in this particular way.

By way of the club’s merchandising and other activities, that would increase the club’s coffers.

“We are always looking to engage with our supporters and fans of the game globally, and through this partnership we will be able to offer exclusive access to the club while giving . . . the opportunity to reach our millions of supporters in South Africa through creative digital media campaigns.”

Although, the financial detail of this new deal was not disclosed, just like most signings relating to Arsenal, it the believe that such increased partnership would aid the club’s cause in the transfer market, so that it can continue to compete for top players in the high echelons of the game.